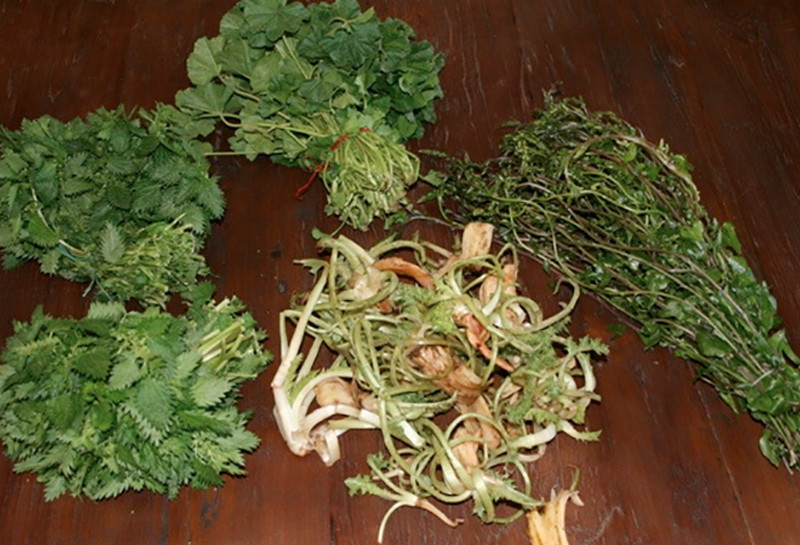 Years ago, I lived in a  Turkish village.  In Spring I would tag along with local villager women as they gathered wild plants for food and medicine.  We hiked over rocks and Roman relics to collect roots that tasted like chicken, spicy wild asparagus, rich green mallow leaves, bitter dandelions and many of the wispy weeds found in my Oregon back yard.

The stinging nettle is not only a culinary treasure, but it delivers a long list of health attributes, making it a prized herbal medicine too.

Turks believe nettles cure cancer — not help heal from it or nourish a cancer patient but to cure the disease.  I was told this in no uncertain terms by villagers, herbalists at the spice bazaar, educated Istanbul friends and even by a Turkish pharmaceutical heir.  I have no idea if this is true but it certainly sweetens my nettles soup.

Stinging nettles are infamous for their ability to trigger a burning or stinging sensation, including redness and irritation, when touched.  Tiny hairs on nettle leaves and stems release formic acid, the same biting chemical red ants are known for.  Light cooking renders them harmless.

The homeopathic principle “like treats like” is evident here: nettles can treat similar symptoms as they cause, namely irritation, redness, inflammation and swelling.  Nettles have been used over the years and across continents for hay fever, seasonal allergies, hives and other histamine mediated problems. Nettles block histamine receptors, which reduces the allergic response.

The anti-inflammatory action of nettles also makes them useful for eczema and arthritis pain.  Nettles have also been used throughout history to treat kidney stones, urinary tract infections, diarrhea and even nosebleeds.

The deep green of cooked nettles demonstrates their rich chlorophyll content, confirmation the plant is a magnesium powerhouse as this mineral sits at the center of the chlorophyll molecule.  Nettles’ iron content coupled with vitamin C (which helps iron absorption) makes them a traditional therapy for anemia.  They are also rich in folate, a cancer fighter and vitamin K, which enables blood to clot normally.

Nettles make a delicious diuretic, helping to flush excess fluids from the limbs and belly.  The herbal literature says nettles are a liver tonic and help with spring detox.

Research confirms what the Turks claim, that nettles have anti-cancer effects, in particular, stopping the growth of prostate cancer cells.  One study found a specific chemical in nettles makes a type of cancer drug 50 times more effective.

Although dried nettles are sold along side other bulk herbs, nothing beats the vibrancy of fresh.  You will often find nettles growing on boggy creek banks.  I don rubber gloves to painlessly pluck their tops, leaving the majority of the plant in tact to continue growing.  A less risky option is to seek out fresh nettles bagged at a local farmer’s market. As soon as nettles hit the hot water, their sting dissipates.

The Turks serve nettles as a mouth-watering meze (small) plate. The tips of the plant are briefly boiled, drained, then drizzled with olive oil and lemon juice, sprinkled with salt and fresh pressed garlic and served with seafood or lamb.

My springtime favorite is nettles soup. It is easy to make:  Add a generous amount of fresh picked nettles to lightly salted chicken stock and simmer 5 minutes or so until tender. Then puree with a soup immersion blender. For a thicker soup first boil a peeled diced potato, then when tender, add the nettle leaves. Finish with freshly ground nutmeg or truffle oil.

Whether picking or preparing fresh nettles, don’t forget your gloves.

Afiyet olsen – loosely translated this is Turkish for Bon Appétit. It is said whenever food is involved.